His plan uses Fortune 500 corporate wealth currently stranded overseas that Congressional leaders also want to repatriate with an alternative plan to pay for improving the nation's roads and bridges via a new lower corporate tax rate. 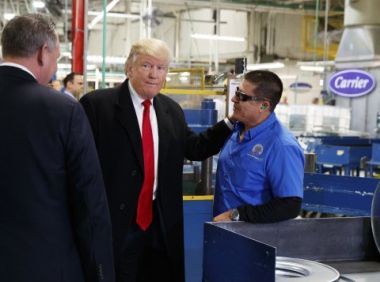 Bernaden said other nations have long-term policies and long-range programs to more smartly support their manufacturers at home and abroad, pointing to a new "Policy Makers Guide to Smart Manufacturing" published last week by the Information Technology and Information Foundation, a Washington DC think-tank. That report provides a comprehensive summary of the long-term Smart Manufacturing policies and long-range programs established by other governments worldwide, most notably by China, Germany, Japan and Korea.

Past bipartisan 20th Century U.S. industrial policies and Congressional programs have been complacent in creating this crisis, he continued.

"As a leader who values building things, President-elect Trump will soon have an opportunity to smartly lead our nation's Manufacturing, to renovate the world's oldest factories, as well as to start a construction wave of 2,000 to 3,000 smart new factories and plants in every State across America," he concludes.