In honor of Pearl Harbor Remembrance Day, this is the story of how 3D scanning and printing is helping to preserve an historical monument for the U.S. Navy. Thanks to the state-of-the-art technology, the monument will now be reproduced in a variety of sizes and will pay tribute for many years to come.

In 1970, the Seabee Memorial Foundation was formed to build a monument in Washington, D.C. to honor the memory of those who served in Naval Construction Battalions. The famous Felex de Weldon -- a former Seabee -- designed the Monument of dark brown marble with bronze figures and bronze back wall. 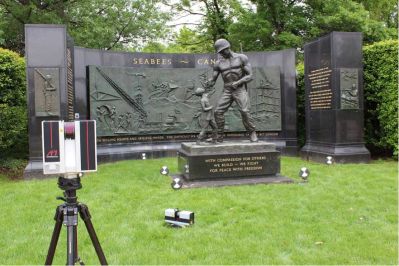 Automated Precision recently volunteered their services to 3D scan the entire monument using the latest 3D scanning equipment. This will allow the CEC/Seabee Historical Foundation to render any size monument, from table-top size up to original full scale size using the 3D data modeled inDesignX. A local university will 3D print a model of the monument for the Seabee Historical Foundation.

Automated Precision sat down with Rear Admiral David J. Nash and other former Seabees to hear what the scanning of the monument means to them and how it could help preserve the Seabee heritage going forward.

When asked, "What does the Seabee Memorial mean to you?" Admiral Nash said, "It's more about what the memorial means to the Seabees. It's sort of a grounding. Every year around the Seabee birthday, which we say is in the first week of March, we all come out to celebrate the history of the Seabees. We have World War II Seabees, Korean Seabees, Vietnam Seabees, and Afghanistan Seabees. We celebrate that. It's the grounding for the entire cadre -- not only for us, but for the Civil Engineer Corp who serves with the Seabees." 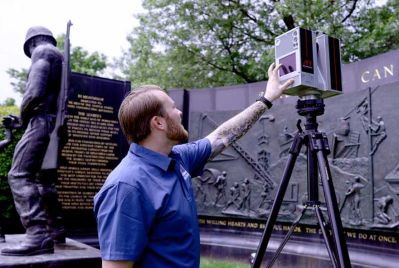 Ken Bingham, former Seabee and now volunteer with the CEC/Seabee Historical Foundation said, "This project has been on my mind for a long time -- to get a replica of this for the museum so we can distribute to donors and sell it in the store -- it's a really good project. I'm really proud API and I met up to get this done. It's really important that we preserve this. This monument encompasses everything about the Seabees. Can do, can build, can fight."

The scanning was done by Stephen Strand, Applications Engineer for Automated Precision. Using two of API's scanners, the API Hemiscan and the API Imager, he made a digital copy of this statute. He says, "We're going to scan it at a pretty high resolution that way we get a pretty clean polygonal model that they will use for the 3D printing. They'll have the ability to scale this down to a mini version, or with the density that these scanners provide you could even print a to scale model if you wanted to. The targets in the background help us combine all these positions together and creates a network of the scans as they go around. That way the scans know their positions as we walk around the statue and get the scans from the different sides." 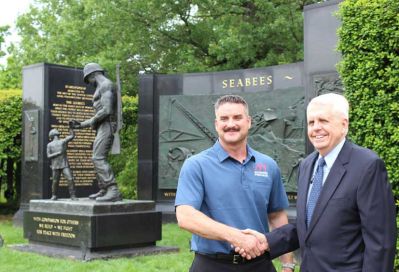 After programming the sectors Strand hits the start button and lets the scanner go to work. "The targets are at a decent angle. Normally you want them to be as straight as you can. I'm using one of our scanners on a low stand to get the low angles. This is good especially for the statue because it's not shiny so we will get a good return. I was able to get it about 10 feet away which is its sweet spot. It's only about a 4 minute scan even on ultra high resolution."

Robb Rudluff, Regional Manager for API and current Seabee says, "I was invited to the Seabee Memorial because I am a Seabee. I've been in the Navy for 15 years and I'm currently in the reserves." Robb says, "API uses laser trackers which our founder Kam Lau developed. We're shooting a beam of light to a three phased mirror the light is collimating and bouncing back and as long as we know the angle of those two encoders and time of flight we know the position. 1000 points a second is what we're getting back."

He then speaks to the importance of sitting down with Admiral Nash, "Admiral Nash is what's known in the Seabee world as King Bee. He's the guy that controlled all the Seabees and if you're not familiar with what the Seabees are, it stands for Naval Mobile Construction Battalion, or 'CB' for short." 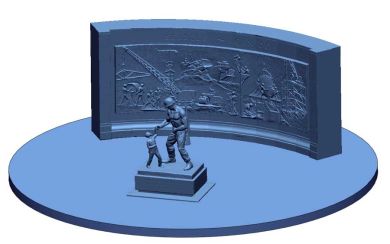 Admiral Nash explains how the Seabee Heritage Foundation began: "It started with me back in 1991 when I was the commanding officer of the CBC, Construction Battalion Center. It appeared to me that we had a museum, but it was going downhill. The roof leaked, the exhibits were being damaged, and we were losing money. I decided something had to be done. So I called on some retired CEC's and Seabees to come meet with me and we formed a foundation because we knew something had to be done to maintain the heritage of the Seabees. That's what we live on is the heritage. We stand on other people's shoulders. I've been on the board of the trustees for the Seabees historical foundation for years. We were able to raise 12 million dollars and built a building and a museum. We're in the process now of raising money to finish out the exhibits. We've got temporary exhibits in there now but we're adding to it. We're working hard to try to keep the Seabee heritage alive so that young people can come and see it."

Ken Bingham reiterates how important the statute is to the history and future of the Seabees: "The Seabee has a rifle, that's a fighter, and he has a child with him. The Seabees have been called the Peace Corp of the armed services. We build for freedom with compassion, and we've helped a lot of people around the world. Many parts of the country have a warm place in their hearts for the Seabees. I'm just very fortunate that API, one of the best companies in this 3D scanning business, was able to do this for us. I'll be grateful for a long time. It's great for API and they are really doing this community a service. It's a great job for celebrating history."