The expanded contour machining cycle for Sinumerik CNCs now facilitates 4-axis turning on lathes. Two turning tools, opposite one another, machine the workpiece simultaneously enabling the machining time to be significantly reduced. In addition, the two turning tools, opposite one another, prevent workpiece distortion significantly improving dimensional accuracy particularly on long, thin workpieces. 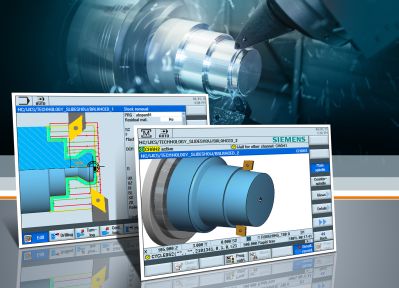 A unique advantage of the Siemens controls is that the new machining process can be programmed directly on the Sinumerik CNC without a CAD/CAM system. With just two additional parameters, the user expands the machining process for a tool into highly productive balanced cutting with two tools. The Sinumerik contour machining cycle automatically creates the CNC sequences.

In 4-axis machining, a distinction is made between synchronous and asynchronous path control with the channel-based Sinumerik control executing two independent CNC programs simultaneously.

In synchronous machining, which is particularly suited for roughing and finishing, the cutting inserts are exactly opposite one another and move identically. The cutting depth is equally distributed over both cutting edges making it possible to double the feed rate per revolution and chip volume. In asynchronous path control, used for roughing, the two tools move differently.

In longitudinal turning, the cutting inserts work at different diameters and in face turning they work at different Z positions. The chip volume relative to a tool can be roughly doubled due to the short waiting times for tool synchronization.