Quick and agile, with "human-like" flexibility of movement, the Motoman® Slim Dual Arm (SDA-series) robots provide the reach, payload, speed, performance and flexibility required to perform a myriad of assembly, handling, machine tending packaging and part transfer applications that formerly could only be done by people. 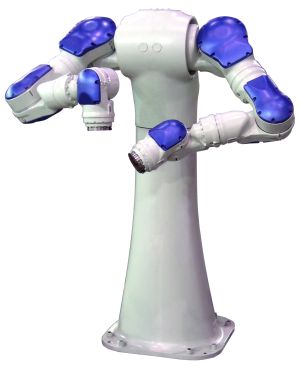 Yaskawa's demonstration of this robot was a must-see event at IMTS 2012. Often, dozens of attendees stopped, smiled, and recorded the "human-like" robot in action.

SDA-series robots feature 15 axes of motion (7 axes per arm, plus a single axis for base rotation). Internally routed cables and hoses reduce interference and maintenance, and also make programming easier.

Both robot arms can work together on one task to double the payload or handle heavy, unwieldy parts, trays or pallets. It can also lift much more than its payload capacity when using a jib crane, or other lift assist device.

The ability to use dual independent arms to process parts reduces the need for expensive custom fixturing and allows end-of-arm tooling to be simple and less costly. SDA-series dual-arm robots can hold a part with one arm while performing operations on the part with the other arm. Parts can be turned over by a simple hand to hand transfer with no need to set the part down, or add additional hardware.

The actuator-based design of the SDA-series robots means that the motor, encoder, reducer and brake for each robot axis are combined in one small, lightweight yet powerful package that is significantly smaller than a traditional AC servo motor drive. Advantages include a slim arm profile, lightweight robot body and high wrist moment and inertia ratings.

SDA-series robots are available with the new FS100 controller or the DX100 controller. The FS100 is Yaskawa Motoman's new small, powerful, and open controller that is designed for small parts handling and assembly applications. The FS100 controller enclosure used with SDA robot models is 714% smaller in volume than the DX100. It can be mounted under a conveyor, or in other space saving locations. In addition, it features improved communication speeds, high-speed I/O response and high-resolution timers. It supports a wide range of communication networks and compliant to safety standards.