Aero Race Wheels is the leading supplier of premier steel racing wheels for NASCAR events. Founded in 1995, the company has grown to become the US's largest manufacturer of steel racing car wheels. The company's facility in Estherville, Iowa, produces hundreds of race wheels every day, which are used by a broad cross-section of the racing community. Drivers participating in IMCA and WISSOTA events use Aero Race Wheels' products, and more Cup, Nationwide and Camping World Series races have been won on the company's 59 Series NASCAR wheels than all other brands combined. 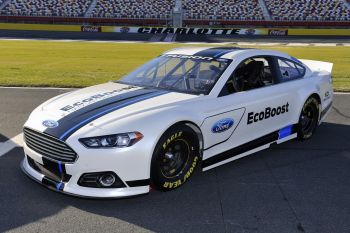 Many of the cars in NASCAR events race on high performance wheels manufactured by Aero Race Wheels.

Aero Race Wheels utilizes spin forming techniques to produce its high performance racing wheels. The process involves rotating a cylindrical steel work piece and a forming tool at high speed while exerting localized pressure using a roller, causing the metal to flow over the tool. The technique is ideal for manufacturing axially symmetric parts such as wheel rims. It creates a very strong, seamless component from a single piece of material, with little or no scrap.

The shape forming operations are performed on a 20-year-old Autospin metal spinning lathe. This machine has two sets of pressure rollers - one at the front of the work piece, the other at its rear - which enable both sides of the wheel rims to be formed without manual intervention. Each set of rollers has two motion control axes, X and Z, driven by four hydraulic cylinders, plus the motor-driven lathe spindle.

Given that the seasoned Autospin lathe is vital to its manufacturing operations, Aero was becoming concerned about its reliability. Although supporting the machine's mechanics was not problematic, obtaining replacement parts for the original motion control system had become nearly impossible. 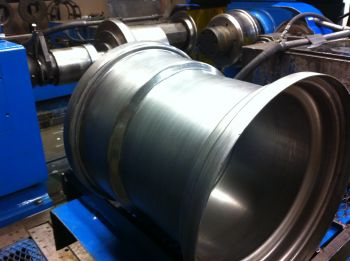 Further, the original control was at best rudimentary. It had limited functionality and could only be programmed using a point-by-point data entry table that made it difficult to visualize and modify machine motion, demanding extensive operator training. And because the system could only store programs for a few types of wheel, production changeover was often time-consuming - typically taking up to three to four hours or more - severely impacting the economics of the company's small batch oriented production processes. To improve this situation, Aero turned to a machine rebuilder which specializes in machine upgrade solutions for the spinning market.

The machine rebuilder performed a comprehensive mechanical and electrical rebuild of the lathe. For the critical CNC element of the refurbishment, it chose to retrofit a high-end solution from NUM, primarily because unique application-specific software developed by NUM's US facility helped overcome all limitations of the lathe's existing control system. The software is a tailored version of the NUMspinform control package for spin forming applications. The retrofit also includes a NUM FS151 operator's panel, a custom HMI programming interface and a customized machine panel.

Prior to the Aero Race Wheels application, the NUMSpinform interface employed a teaching method of programming where the operator begins by copying the shape of the forming tool, or mandrel, and specifying the desired wall thickness of the part; the CNC system then calculates a two-dimensional safety zone to prevent any roller-tool collision. Next, the operator spin forms the new part by controlling the X and Z axes of the roller manually via a joystick, while the CNC system records the motion paths. Before it is saved as the final production program, the recorded spinning cycle can easily be optimized by modifying the roller path in the X or Z axis - on the fly - using a calibrated hand-wheel. 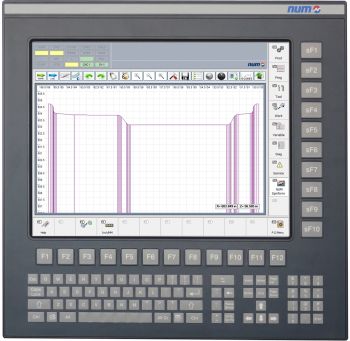 The machine retrofit includes a NUM FS151 operator's panel, which clearly displays the profile of the wheel that is being formed.

In the case of Aero Race Wheels' 4-axis Autospin lathe, the preferred programming approach is to teach the mandrel safety zone, but to then draw the spinning cycle as a series of spline curves using an on-screen drafting tool. This drawing approach is now also part of the NUMSpinform solution. It has many benefits for a spinner, including a reduction in direct exposure to the machine elements, which increases safety, and a simplified learning curve for operators who do not have the years and years of spinning feel, required for the teach-in process.

NUMSpinform also accommodates offline program generation. Users can choose to create their own tooling files with the software's graphical drawing facilities, or import them from a design automation source such as AutoCAD, and then program a spin cycle using simple mouse-driven point-and-click techniques. As soon as the design is ready, all defined geometry can be converted into a production program with a single click of a button and exported to the lathe's CNC system to produce a trial part. The user is no longer bound by file storage issues to limit the number of spin cycles in the library, as the NUM system provides a local drive as well as access to a network drive.

The NUMSpinform package accommodates either a simple two axis spinning lathe or a four axis machine as in the case of Aero Race Wheels. Aero's machine slides can be programmed and operated as independent paths or in a method where the operator programs one X1/Z1 slide and the other X2/Z2 slide simply follows in a mirrored mode. 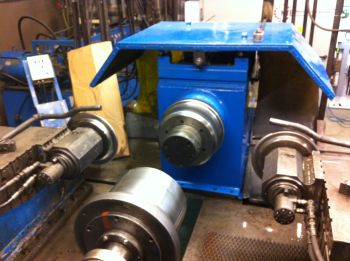 Retrofitting its Autospin lathe with a high-end CNC system from NUM has enabled Aero Race Wheels to boost productivity and automate generation of spin cycle programs.

According to Marv Dailey, Design/Process Engineer, of Aero Race Wheels, "Our business demands very flexible manufacturing - we manufacture mainly in small quantities and we need to switch between batches as quickly as possible, as well as being able to trial new designs. The service provided by NUM and our machine rebuilder partner has been exemplary, giving us a combination of precision mechanics and state-of-the-art metal spinning programming and control. Product changeover typically now takes less than 20 minutes, and the semi-automated method of generating and optimizing spin cycle programs has significantly reduced development and operator training times. Offline programming also frees up time on this critical production machine, further boosting productivity."

Steven Schilling, General Manager of NUM Corporation, points out that application-specific software is central to NUM's business strategy. "Upgraded CNC software is often the most important element of a successful machine rebuilding project, and we have been very pleased with the outcome of this project, which resulted from the very close liaison between NUM's, the system integrator's and Aero's engineering teams."