Manufacturing Technology Orders Up 13% for 2012

Is there a signal of a downturn in sight? 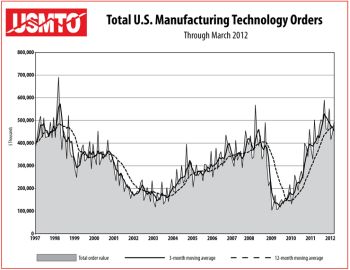 These numbers and all data in this report are based on the totals of actual data reported by companies participating in the USMTO program.

"Manufacturing is expanding with no clear signal of a downturn in sight," said Douglas K. Woods, AMT President. "Manufacturing added 34,000 jobs in March, capacity utilization is just shy of 80 percent and USMTO order growth confounds experts as it climbed 12 percent over 2011 levels. However, remaining obstacles to future manufacturing investment include a lack of access to credit, global supply issues, encroaching industry regulations and taxes, and overall political uncertainty."

U.S. manufacturing technology orders are also reported on a regional basis for five geographic breakdowns of the United States.