Together with GEDIA, AP&T has created what is probably the world's most advanced production line for manufacturing press-hardened components for the automotive industry. The partnership has created a user-friendly, space-efficient solution with a high degree of process reliability and excellent energy efficiency. 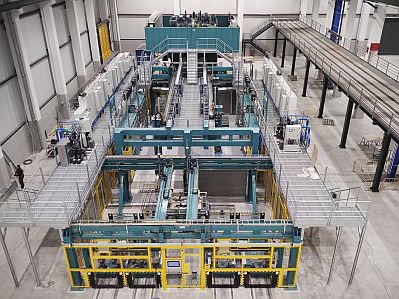 The solution includes AP&T's unique servohydraulic press, boasting up to 70% lower energy consumption than conventional hydraulic presses, and TemperBox®, which enables soft and hard zones to be combined in one and the same finished component.

The first commercial production line containing both innovations became operational at GEDIA in Germany in the fall of 2019. The same equipment was also later installed at the company's facilities in Spain and the US. It is no coincidence that GEDIA and AP&T are pioneering the future of press hardening in the industry. It is a result of a deeply rooted collaboration between the two companies that has lasted a decade.

GEDIA, with its headquarters in Attendorn, Germany, has been manufacturing pressed sheet metal parts for the automotive industry since the mid-1950s.

In 2005, the company began to take a serious interest in the opportunities the press-hardening technology offers for manufacturing structural parts that combine strength and low weight -- attributes that have made it possible for car manufacturers to improve collision safety while reducing energy consumption and climate-impacting emissions. To sound out the market, they contacted AP&T, an early leader of developing production lines for press hardening. 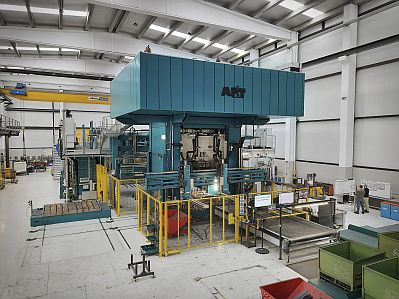 For years, the two companies kept in touch sporadically without it resulting in any tangible business. Not until 2012 that is, when GEDIA sent out an invitation to negotiate.

"It was our impression that GEDIA was interested in potentially investing in their first press-hardening line. When the meeting was over, we had an order for three complete lines, which was naturally a positive surprise," says AP&T's Michael Hunger, Director and Head of Sales and Marketing Europe and Key Account Manager for GEDIA.

The three lines became operational between the years of 2014 and 2016, one in Attendorn and two in the company's production facility in Nowa Sol, Poland.

"It was a technically challenging project that provided useful experiences and sparked the motivation to continue developing and testing new press-hardening technology together," says Hunger. 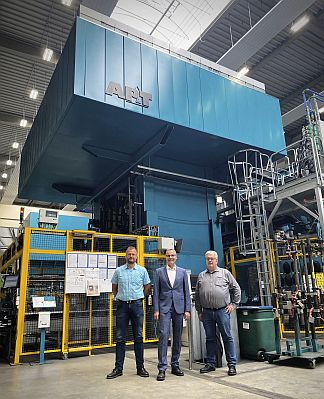 "We now have a user-friendly, space-efficient solution with a high degree of process reliability and excellent energy efficiency." Björn Müller, Burkhard Vogt and Stephan Gante at GEDIA are very satisfied with their new press-hardening line. Photograph: GEDIA.

"It was an exciting project. We resolved the challenges together and managed to get really good results. We also developed and deepened our collaborative relationship, got closer and established new, useful contacts in different parts of the companies," he says.

In 2014, GEDIA was looking for a partner to help commercialize and industrialize a new partial press-hardening innovation, TemperBox®, at that point a prototype, and once again turned to AP&T.

"I contacted AP&T's Sales Manager, Kent Eriksson, whom I got to know while working with the press-hardening lines. I wanted to see how we could develop the TemperBox® technology together," says Vogt.

To become a commercial product, the technology needed to be tested in industrial conditions. Following initial testing at AP&T in Ulricehamn, AP&T was given the assignment to build a try-out line with an integrated TemperBox® for small-scale testing and manufacturing in Attendorn. The results were very promising.

When GEDIA received an order for partially press-hardened parts for one of Germany's major car manufacturers, they needed a new industry-scale line for serial manufacturing. It was the start of a highly interesting project that would push the limits of press-hardening technology.

"Thanks to the successful process and product development, we decided to design a line for mass-manufacturing using TemperBox® as an integral part of the equipment. It was a prerequisite that production would continue without extending cycle times," says Vogt.

Stephan Gante, GEDIA's Group Director of Maschinen- und Gebäudemanagement, was responsible for purchasing the new line and as such, was also responsible for the detailed requirement specification.

"Not only did we need to be able to produce a great number of components per hour, but we also needed to install the line in the limited space of our existing premises. The equipment also needed to be reliable and simple to maintain. It was also of great importance that the solution be energy efficient with a low electricity consumption per produced unit," he says.

"We started planning the new line in August of 2018 and set the target to have it operational by January 1, 2020," says Jörgen Theander, AP&T's person responsible for the project.

The greatest technological challenge was uniting two new innovations -- AP&T's servohydraulic press and TemperBox® -- into the same line for a process that had never before been used commercially. Organizationally, it was a challenge to put together a dedicated project team with just the right expertise, not to mention the right attitude toward the project. During recruitment, experience of the automotive industry was a must, as were excellent cooperation and listening skills. 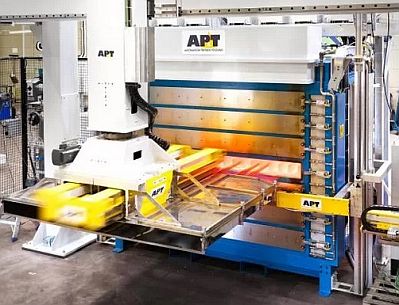 AP&T's production solutions for manufacturing press hardened parts include all of the required technical equipment such as presses, automation, tooling and furnace systems.

"It was crucial that everyone, from the project team to R&D, really understood the expectations our customer and their customers had on the line. The goal was to manufacture on an industrial scale products with tailored, repeatable attributes with short cycle times, high availability and optimized energy consumption. That was what we were striving for," says Theander.

To improve efficiency, GEDIA also put together a project team with the corresponding expertise under the lead of Björn Müller, who both participated in the installation of the lines in Nowa Sol and was responsible for the work on the try-out line in Attendorn.

"I already had positive experiences working with AP&T, and these were confirmed when we now embarked on a new project together. During this journey, we developed a close relationship based on trust, which meant we could solve our tasks very smoothly. Nothing was left to chance," says Müller.

The project's starting point was the documentation from the existing production lines and the try-out line installed in Attendorn. Questions such as what proven design solutions could be used in the new line, what needed to be improved and what would be replaced by the new technology were asked. Using this analysis, a requirement specification was made and efforts to realize the new line could be started in earnest. In the fall of 2019, it was installed and commissioned in the Attendorn production facility. 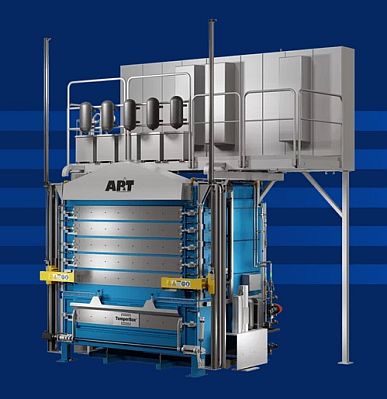 "Since it was the first commercial press-hardening line of its kind, it was important to maintain a presence for some time to ensure that it was functioning properly, tweak the equipment and be able to rectify any problems that might arise," says Theander.

Even before the first line was completely installed, AP&T received an order for an identical line for GEDIA's Spanish production facility outside Barcelona.

"We were able to draw on our experiences from the first line from the very beginning of working on the second. So just 17 months later, we were able to deliver a solution optimized for the Spanish facility together with GEDIA's German organization."

In January of 2020, GEDIA ordered a third production line of this type. This time, it was for their Dalton, Georgia, factory in the US and was to be installed in the fall of 2021.

It's All About People

"Together with GEDIA, we developed what is probably the world's most advanced production line for manufacturing press-hardened components for the automotive industry. By collaborating, we not only solved technological challenges and gained valuable experiences, but we also managed to meet high expectations," says Theander. 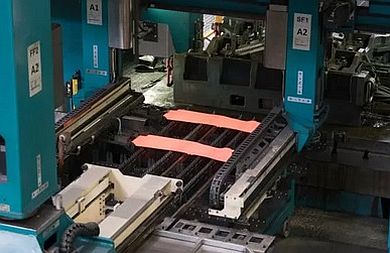 "Through professional, trustful and forward-looking collaboration, we jointly developed and industrialized a new technology, with a business-strategic focus. But it is all about people. They must be dedicated to the task, work well together and understand and trust one another. Not only is this how our relationship with AP&T is characterized, but it is also key to our successful efforts with TemperBox®," says Vogt.

So how does the end result compare to earlier AP&T press-hardening lines?

In addition, the new lines make it possible to shorten manufacturing cycle times of certain products by up to 20%, freeing up time for more production.

In the design process, increased availability and a reduced need for maintenance were in focus. Here, the multi-layer furnaces have posed a number of challenges, which the teams resolved together. Now, collaboration will continue in an attempt to significantly increase annual production hours.

"We have also developed our method of verifying the CQI-9 process repeatability of the furnaces so that it goes significantly faster than before. This makes room for more valuable production time," says Theander. 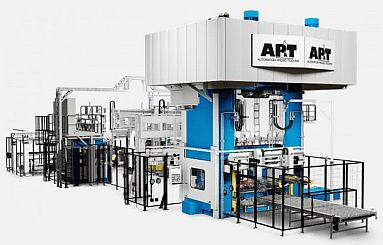 AP&T is one of the world's leading suppliers of complete, turnkey production solutions for manufacturing press hardened vehicle parts.

For Stephan Gante, the original requirement specification has been practically applied three times over. What does he think of the results?

"We now have a user-friendly, space-efficient solution with a high degree of process reliability and excellent energy efficiency. Aside from TemperBox® itself, AP&T's servohydraulic press, with its considerably lower cooling requirements and energy consumption per stroke compared to conventional hydraulic presses, plays a central role in the end result. We are very satisfied," he says.

Björn Müller is also pleased. He says that visitors are impressed, their eyes growing wide when they catch their first glimpse of the new, highly automated lines. He also emphasizes that the developmental journey with AP&T is continuing.

"Every phase of this project has given us new experiences and insights, which we took with us to the next phase. It is a continuous improvement project that is still ongoing," he says.

But perhaps the most important result is the experience gained from this type of collaboration. Or in the words of Jörgen Theander: "We usually talk about how we act as One Responsible Partner® in many of our customer collaborations. But in this joint effort, there have been two responsible partners who jointly created a world-class solution through their clear common goal, an open, curious approach and a deep sense of dedication."