Grede is an independent company in Southfield, Michigan that designs, engineers, validates and manufactures high-quality iron castings for automotive, commercial, and industrial markets. With 10 foundries and 3,800 employees, Grede offers complete precision machining and finishing services, as well as the assembly of diverse components into complete systems. After more than a hundred years, the company is now re-inventing itself with the addition of sand 3D printers. 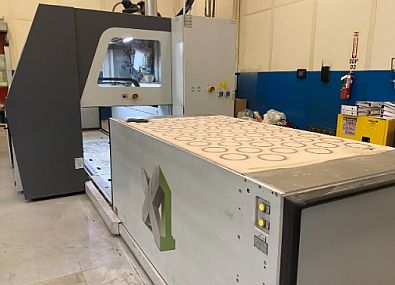 In 2020, Grede celebrated 100 years since its founding by William J. Grede in Wauwatosa, Wisconsin. Since opening its doors, the company has earned a reputation for top-quality, safety-critical, and highly engineered engine and chassis castings for automotive and industrial equipment applications.

Entering its second century in operation, the foundry made a commitment to honor the entrepreneurial spirit of its founder and has turned to advanced manufacturing technologies, including binder jet 3D printing from ExOne, to play a key role in its future business development. 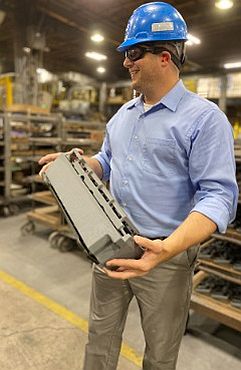 "There are so many benefits to sand 3D printing," said Tyler Hill, Plant Manager of Grede's Iron Mountain facility where two ExOne binder jetting machines are installed. "The speed to market, quality improvement, repeatability, and savings on tooling are just a few of the advantages 3D printing offers our customers. The true value in 3D printing, however, is in the creative freedom that allows us to have a more collaborative relationship with our customers. It moves our foundry out of the 'price per pound' equation and makes us an invaluable development partner for our customers."

A diverse company with nine iron foundries and one machining center, today the Iron Mountain facility is being reborn as an advanced manufacturing hub that supports the entire corporation's rapid prototyping business with its sand 3D printers.

As a centuries-old manufacturing process, metalcasting is rarely associated with entrepreneurship and innovation. Grede's Iron Mountain Foundry, built in 1947 in a small city in the Upper Peninsula of Michigan, is transforming those perceptions by integrating sand 3D printing into the core of its business.

The company serves the automotive and heavy equipment industries, which are challenged with ever-increasing emission and fuel economy standards. As one of the largest producers of critical cast-iron components in the United States, Grede is known for its commitment to light weighting and design solutions.

The Grede team focuses on producing better, more functional castings that increase performance through the entire product value stream and the company's values of innovation, agility, and being quick to market all aligned with the investment in sand binder jetting from ExOne.

Almost 90% of the castings made by the company involve a core. Most are very intricate, multiple-piece assemblies. Hill, who has been with the company for more than two decades, said Grede recognized that advanced manufacturing that enabled component weight reductions and faster response times was the key to future growth. 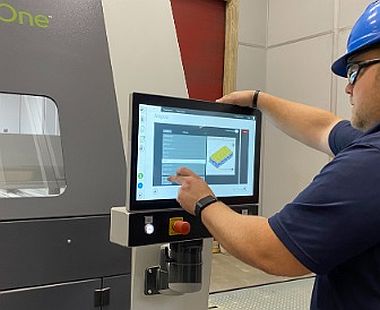 Grede investigated additive manufacturing to replace the conventional core shooters in its facility. "By nature, 3D printing contributes to precise, higher quality components," said Cary Wood, CEO of Grede. "We saw the potential for additive manufacturing to support greater repetition of complex core constructions and invested in new equipment to make it a reality at Grede."

Hill added that foundry processes are traditionally manual and labor-intensive. Grede is embracing advanced manufacturing techniques to change from manual to a more technical process -- and 3D printing is a big part of that. "The initial goal was to purchase a machine that allowed us to take the next technological step and replace historical processes and their limitations," Hill said. "With 3D printing, we not only eliminated steps of assembly that allow us to avoid core shift or variation in the parting line but binder jetting also gave us more freedom of design and allows us to really respond quicker to our customers."

Grede's first S-Max 3D printer was installed in 2018, with an immediate impact on operations. When several high-volume jobs began falling behind with the traditional core making process, Hill said the company used its newfound agility with binder jet technology to allow it to quickly react by redesigning the cores for 3D printing. "We were able to keep the mold lines full and running, getting our customers caught up, and redesign the cores to eliminate scrap and improve productivity on the lines," he said. 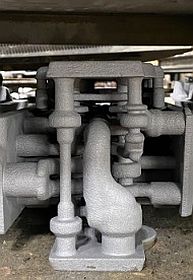 3D printing enables the production of complex geometries, including reduced assembly or monolithic cores that lower cost and weight.

As the cost savings for intricately 3D printed products caught on with its customers, Grede continued to see orders for increasingly complex designs. Its customers were saving significant amounts of money by eliminating the capital cost for tooling, where some pours traditionally required multiple core boxes to be built. "Instead of paying for four to five core boxes at $50,000 each, now we can print their design as one core," Hill said.

With 600-700 tons of sand on-site with approximately 500 tons moving in the plant at any given time, Grede optimizes its resources. 71 tons of silica sand are processed by each machine each year. Sand from the 3D printing process is reclaimed and split for use in future prints or mixed with traditional molding sand. The company continues to optimize its process with the goal to reclaim 100% of its sand for exclusive use in future 3D printing processes.

Producing nearly 300,000 parts per year on its first machine, the foundry installed its second ExOne system, an S-Max Pro, in 2021 to keep up with demand. Today, together with investments in other advanced systems including robotic cells, one shift at the Iron Mountain facility produces the same amount as two shifts in the past.

Deepening customer relationships by solving problems with innovative solutions is the true value of ExOne binder jet technology at Grede. Leveraging the collective knowledge within the Iron Mountain facility, the company works with customers to redesign parts for the benefits of additive manufacturing. 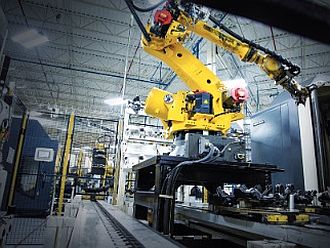 Acknowledging the assumption of foundries being outdated factories with old-fashioned processes, Grede Iron Mountain prides itself on the collection of advanced manufacturing investments in the facility.

"We have a customer we've been working with for years and we're now closer than ever because we can make design changes on the fly," Hill said. "We can accommodate their requests and continue to optimize the design with them."

Grede has also begun establishing new relationships with the ability to quote 3D printed rapid prototyping that can reduce production launch lead times. "It's not theoretical testing, we can bring an idea to life through rapid prototyping," Hill said. "The S-Max opens that door for us to provide unique capabilities to our customers."

A customer once shared a CAD file and application specification for a quote. "Two weeks later we sat them down in our conference room to review the quote with two complete gray iron castings on the table -- one full and one fully sectioned so they could open it up and look inside the valve," Hill explained, remembering the surprise on the customers' faces. "They were floored to see a CAD drawing turned into an actual, functional casting." 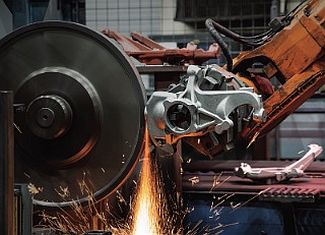 Aside from binder jetting, the foundry has installed eight robotic grinding cells and automated cleaning operations.

Grede's one-stop-shop capabilities to assist customers from engineering and design to casting and quality control also enable expedited lead times not achievable with traditional methods. "Once we were able to redesign a complex water jacket core from a four-piece assembly down to one piece, send it directly to the 3D printer, and hand- deliver a final part to the customer in one week," Hill said, explaining the ability of the company to prototype castings to meet critical, and sometimes very short, deadlines.

The increasing mix of prototyping and production jobs drove the investment in an additional ExOne system after one part design reserved nearly 20% of one printer's annual capacity. Today Grede's S-Max systems run 24/7. "We walk away at night, cut the lights in the rest of the plant and the 3D printer just keeps printing cores autonomously," Hill said, explaining how the machines run around the clock because of their value.