BLM GROUP has announced the availability of its ELECT40 all-electric tube bender with an elongated, compact head capable of executing shapes previously not possible with single-direction bending machines. The new bending head is reduced in height by 35% and has a 31% longer bending head, increasing the distance between the bending tool and the machine body. 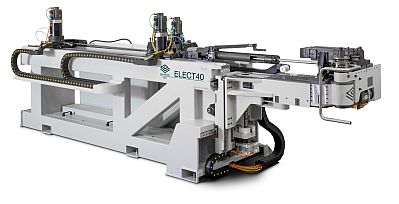 The increase in distance reduces the chances of the tube colliding with the frame, providing greater parts feasibility. It is especially well-suited for manufacturers needing to bend tubes into complicated and various shapes such as those making furniture, ladders, handrails, farming machinery and equipment.

The kinematic design of the elongated head provides an increase in speed of both the bending arm and of the clamp and pressure. Additionally, this system can achieve about a 10% increase in cycle time on a typical part with four bends.

The ELECT40 can bend tube and pipe up to 40mm in diameter and has multiple tool stack capability that can accommodate multiple tools of variable radius at the same time, enabling the production of fixed and variable radii in a single setup.

As with other BLM Group benders, the elongated bending head of the ELECT40 also allows manual changes of bending direction from right to left or vice versa and the use of the same compatible bending tools on all other BLM GROUP bending machines of similar size.

Both automatic or manual loading is available with the ability to position the automatic loader to the left or right of the machine. The ELECT40 bender can incorporate automatic tube bundle loading and a handling robot for a complete turnkey solution that manages the entire tube loading and unloading sequence.