ARES Modena has launched a new exhibition in Miami for the company's latest supercar model. The exhibition, including artwork by American artist Hubert Phipps, runs through the end of January. (If you have to ask how much it costs, you can't afford it!)

The exhibition Hubert Phipps: Ascending is on display through January 31 and will usher in the arrival of the ARES S1 supercar model for its North American premiere during the run of the exhibition.

"We chose these bold sculptures and artworks by Hubert Phipps to debut our first U.S. showroom, and to surround the ARES S1 supercar model for its North American premiere, because when experienced together they create a powerful fusion that supercharges the imagination," said Mo Elarishy, of ARES Miami.

"The tradition of coachbuilding is a form of artmaking going back 100 years, hand-crafting limited production vehicles for discerning customers," adds Elarishy.

The new ARES S1 supercar model was flown from Italy to Miami and had never been shown in North America. The one-of-a-kind, automotive work of art will be the centerpiece for this exhibition, surrounded by sculptures and artworks by Phipps that are seen as a perfect fit with the creative aesthetic behind ARES Modena's singular success in automotive design. 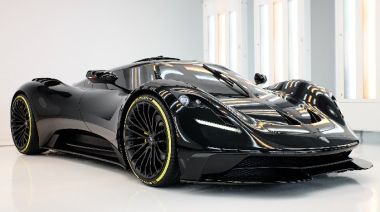 Only 24 versions of the ARES S1 supercar will be created in the entire world, each tailor-made to the client's desires and taste, making each design unique. The ARES S1's dramatic low-profile is similar to racing prototypes from the 70s and 80s.

Hand-crafted in carbon fiber, the curvaceous wheel arches, with sculptured side skirts and forward sitting cockpit, give a sleek yet aggressive stance. 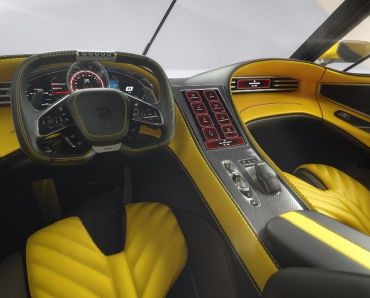 The S1 is powered by a naturally aspirated V8 delivering power to the wheels via an 8-speed dual clutch transmission. The interior combines the finest Alcantara and Napa leather that is quilted in specific areas.

A sculptor and painter, Phipps was also a national racecar champion and is a pilot, coming up on his 50th anniversary as an aviator. The exhibition Hubert Phipps: Ascending features several works born out of the artist's love for acceleration and for aerodynamic forms (he often pilots his Airbus Helicopter H-120 down to Florida from his artist studio in Virginia). 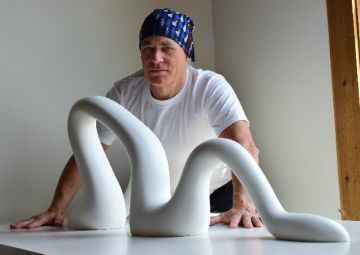 "I am honored to have been invited by ARES Miami to present this collaboration during Art Basel Miami," said Hubert Phipps. "ARES is one of the world's leading studios of high-performance design and stellar engineering igniting new inspirations in my artmaking."

"Hubert Phipps' racing background and his passion for automobiles shine through in the kinetic energy of his sculptures," said Mo Elarishy, of ARES Miami. "The creative process of coachbuilding is a form of automotive craftsmanship similar to producing a sculpture."

"The CAD 3D technology that Phipps utilizes in his process, and his masterful techniques with materials, are cut from the same cloth as the modern-day coachbuilding experience. This same artistic essence is central to the success of ARES in its approach."

Headquartered in the European supercar community of Modena, Italy -- home to the legendary Ferrari, Maserati, Lamborghini and Pagani -- ARES uses advanced technologies to offer the highest level of individualization, as the designers, engineers, and craftsmen bring dream cars to life.

While the vision of ARES Modena is focused squarely on the future of the luxury automotive industry, its roots are planted in the past and the grand tradition of Italian coachbuilding. It is an art form synonymous with craftsmanship and outstanding manufacturing, with each product made to order and by hand.

Later, in the 1960s, Italy became the main center for the most reputable coachbuilders.

Many one-off coachbuilt motorcars remain priceless today, and are admired by their owners in their private collections as works of art.

Advanced computer CAD systems, 3D scanning, and 3D printing are currently utilized, as coachbuilding enters a new era with unlimited possibilities. Located at 151 NE 41 Street, the ARES Miami showroom was designed by the ARES Centro Stile department, which drew its inspiration from the clean-cut lines of the modern day art gallery.