It's Not Only Automobiles that are Going Electric -- Airplanes are as Well!

To ensure NASA's new X-57 "Maxwell" electric aircraft would be energy efficient and safe for use, NASA carried out extensive ground vibration tests, simulating the stresses it would experience during a real flight. With the increasing demand for electric-powered ground transportation, NASA wanted to prove that an aircraft could also be electrically powered. The result is the X-57 "Maxwell" airplane, which -- instead of the usual gasoline-powered motors -- has two, all-electric motors powered by traction batteries.

As NASA engineers design new electrically powered aircraft, they must ensure that their designs not only use energy efficiently but also that the aircraft can fly safely. 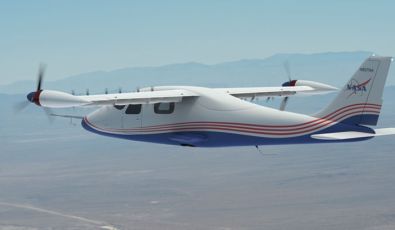 One way they do this is to build an analytical model of the aircraft structure and simulate the stresses the aircraft will experience while in flight. By doing this, they can uncover weaknesses in their designs and fix them before making expensive prototypes.

However, there's no substitute for physical ground testing. At some point, engineers must strap an airframe to a shaker and take some measurements. These physical tests are essential for validating the simulation models and the understanding of structural characteristics of any new aircraft design.

A ground vibration test, or GVT, is performed before the first test flight is made.

During a GVT, test engineers subject the aircraft to a number of different vibration profiles while measuring the response at hundreds of points around the airframe. Analyzing these measurements help engineers identify the modal frequencies and mode shapes of the airplane in a flight-ready configuration. This allows them to validate and update the aircraft's finite element model (FEM), which they will then use for flutter analysis predictions.

In the end, the flutter analysis tells them whether or not a structure has the necessary aeroelasticity and flutter margins necessary for airworthiness.

When running a GVT, it's important that the test article be as close to the final design as possible. This can lead to some interesting challenges for the test team. 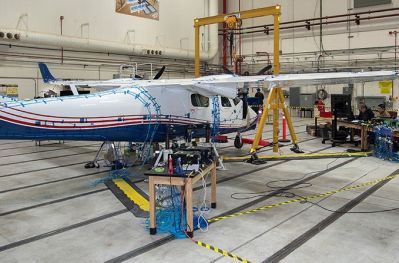 For example, during the GVT, the heavy and high voltage electric motor batteries were not real. In normal operation, sixteen traction battery modules power the twin electric motors and amount to nearly a third of the airplane's total weight.

The airplane configuration for the GVT contained power cables in the wing in addition to other flight instrumentation cables and sensors (flight accelerometers and strain gauges); all the components were installed before the airplane arrived at NASA Armstrong. The airplane weight (including all of the GVT locking devices, hardware, and ballast) was measured at 2,782 pounds prior to installing the GVT external accelerometers.

Because the objective of this GVT was to test two main boundary conditions, there were two different test setups. The first setup, called the "soft support" system, was designed to simulate a free-flight environment. It used bungee cords to suspend the airplane at underside airplane hard points. This was a real challenge because manufacturers do not normally measure the characteristics of bungee cords for use in these kinds of tests. 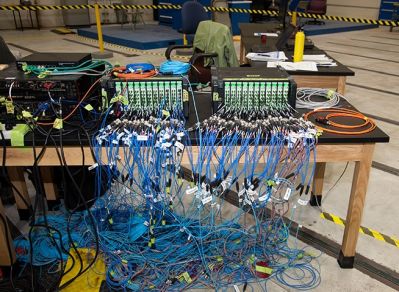 Prior to the GVT, NASA first performed numerous bungee characterization tests to ensure that the bungee cords selected could both handle the load and have a low enough frequency response to ensure separation from the first airplane modal frequency.

The second GVT setup was called the "on-tires setup." For this test routine, the airplane had its landing wheels installed, and during the test, the aircraft rested on the ground. The tires were inflated to normal service pressures, and the airplane crew performed a shakedown of the airplane nose, tail, and wingtips to allow the struts to settle at equilibrium prior to testing.

For the first test setup using the soft support system, also called the free-free setup, the team installed accelerometers at 127 different locations, which allowed them to measure 318 degrees of freedom (DOF). They distributed the accelerometers along both sides of the airplane fuselage, wing spars, control surfaces, motors and soft-support frames (located at the main landing gear and the fuselage nose) using the global coordinate system of the airplane. 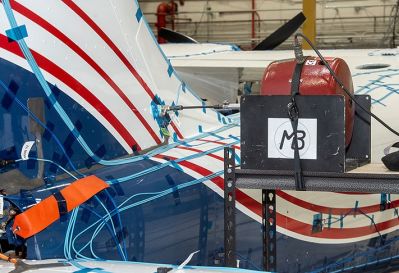 For the on-tires setup, they removed the accelerometers from the 14 locations on the soft-support system, leaving them with a total of 113 accelerometer locations, measuring 276 degrees of freedom.

In addition to the GVT external accelerometers, they acquired data from the flight accelerometers using the airplane's instrumentation system and compared this to data gathered from the nearest GVT accelerometers. 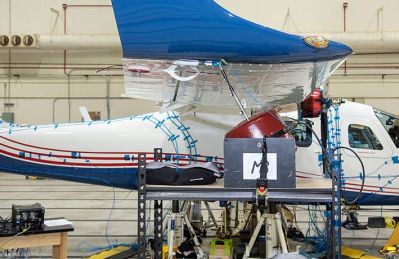 The GVT results showed many airplane modes that did not show up in the pre-test Mod II FEM modal results. These missing FEM modes identified during the GVT will assist with the post-test model updating and correlation process.

The GVT results gave NASA a much better understanding of the modal characteristics of the X-57 Mod II Maxwell configuration. The test showed that the pre-test airplane analytical model did not capture all the modes that were observed during the test. Updating the model to show these modes is going to be a challenge for the X-57 project team, but they now have the necessary modal test results to do it.

HBK provided support both before and during the GVT as one of the keys for success on this project.