Historically, replacement parts needed on remote military bases have been brought in on airplanes, ships, and truck convoys. It's a costly and complicated supply chain that can take weeks or months between order and delivery. What's more, the U.S. Army, Navy, and Air Force have issued reports citing their need to reduce operational vulnerability and improve effectiveness, while reducing waste. 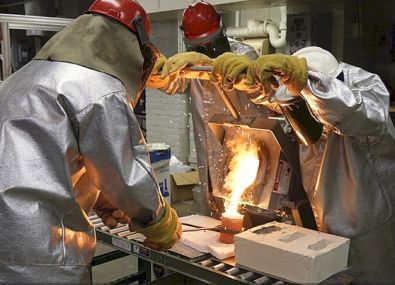 To help address these issues, materials scientists and engineers at Worcester Polytechnic Institute (WPI) are developing a manufacturing process that will enable the military to slash wait times for parts, increase unit readiness, reduce logistical operations and costs, and make deployed troops safer and more self-sustainable.

The Army's Expeditionary Lab is a mobile, self-contained manufacturing unit. It is compact enough to fit into a shipping container or truck, and can easily and swiftly be moved to bases around the globe. Already in use in some remote military bases and positions around the world, the WPI research project will upgrade and expand its usefulness by making it easier and more efficient for units to reuse scrap metals already on hand -- such as broken brake rotors or tire rims -- in order to make critically needed replacement parts for everything from vehicles to medical equipment.

"This could revolutionize the way we manage wartime operations, reducing our vulnerability in the field," said Jianyu Liang, professor of mechanical engineering and a co-PI on the project. "WPI's research aligns with the Army's need to be able to fabricate replacement parts from what would otherwise be wasted metal at or near soldiers' point of deployment to ensure they are prepared at any time and in any theater." 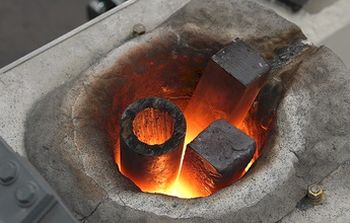 What's more, the use of waste metal also minimizes the environmental impact of military operations by using up what otherwise would largely be discarded on site; all military installations create metal waste as a normal consequence of military operations -- up to four pounds of solid waste per soldier per day, according to DoD estimates.

The WPI project began in 2019 when the WPI research team was tasked with creating a front-to-end agile manufacturing process that combines existing 3D printing technology, metal analysis equipment, and a casting process, in which ceramic molds of needed parts are formed around a plastic pattern that can be created with 3D printing. Scrap metal of the appropriate alloys is then melted and poured into the molds to create needed parts. 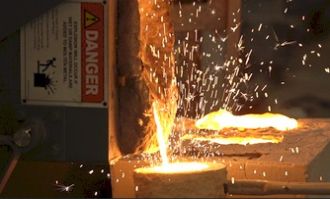 Pouring the extra molten metal into a ceramic spoon for future casting.

Optimizing the Expeditionary Labs with mobile foundries would make it possible for military units to reuse ferrous scrap (iron and steel), which makes up about 60 percent of all waste metal generated, as well as aluminum, which makes up another 30 percent anywhere at anytime.

"The project's innovation is not about the tools," said Liang. "It's about creating a new process that can use existing tools and technology to create a mobile foundry that can rapidly produce a needed part. This innovation has the potential to change military logistics and modern manufacturing by combining multiple tools and processing stages that are typically carried out in separate locations and facilities into a single, integrated system that can be set up and operated in the field. Making it compact and safe within the space allowed in shipping containers is not a trivial task."

Since the project began, researchers have used machine learning to analyze a database of steel casting processes (using liquid metals and molds to create parts) for the military; designed models to create new alloys from waste metals for anticipated spare parts; and created a compactable 3D-printing-enabled rapid-casting steel foundry that updates an age-old model for metal casting factories.

As part of the project, WPI researchers have been developing methods technicians in the field can use to determine which alloys are needed to make particular replacement parts, and to identify and extract those alloys from the scrap they have on hand. The technicians will be able to consult a metal blending model that was developed based on a growing database WPI researchers have created by analyzing scrap metal supplied by the military to detail the metallurgical composition of a wide range of the parts most commonly in need of replacement or repair.

"Our process has led to the creation of a manufacturing unit with a much smaller footprint than typical models," said Liang. "It is compact, transportable, safe -- and it complies with the power and water limits imposed by the SERDP program. Although we can't predict what will need to be replaced, by bringing all of these technologies together we can create any part needed on the fly, and we can do it with scrap metal."