Bilsing Automation recently supplied all the tooling and storage carts for a new Schuler PXL stamping press installation at an automotive OEM facility in South America. Watch the press in action.

The multi-station stamping line features 18 dies and nine crossbar robots, with Bilsing supplying the tooling for transferring parts between stamping stations; this included more than 324 grippers and over 1600 of its PFG vacuum cups, as well as 54 storage carts for holding. 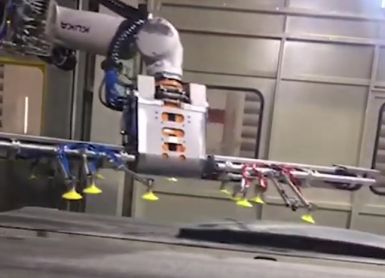 The internal pre-assembly was built by the Bilsing Spain subsidiary using the pick positions defined in the 3D. Pre-assembly and tests of the overall tooling were done at the Bilsing Iberica facility. After packing of the tooling and transport to the plant in South America, it was set up for try-out with the PXL line on the plant floor.

"The partnership between Bilsing Automation and our customer resulted in a successful launch of the PXL line, making it a reference and benchmark for other plants in Brazil," said Anderson Franco, manager, Bilsing Automation South America. "I'm proud of the Bilsing team's ability to handle every aspect of this project and meet the quality and performance results expected in terms of SPM of this new line."

The new 2100-ton PXL line, which has numerous stamping stages, is located in a 100-meter area previously occupied by 27 old stamping presses. It has proven to be four times more productive than these previous presses -- where the old presses took 12 to 14 minutes to stamp a part, the PXL accomplishes this in between two or three minutes. Plus, tooling and die changes are now completed in under five minutes, versus 45 minutes with the older process.