NVision works with many industry leaders such as Boeing, GE, Lockheed, Lear, NASA, Porsche, Toyota, and every branch of the U.S. military. In the Energy sector, companies include GE, Siemens, and Dresser-Rand.

It is in this sector where NVision's engineering services are helping coal-fired power plants convert to natural gas more quickly by determining where to install updated instrumentation necessary to retrofit turbines to accommodate the new power source. 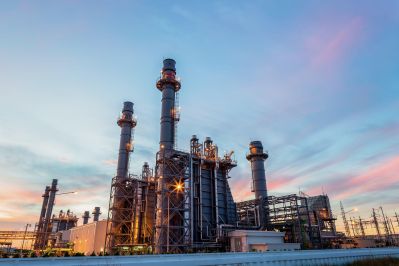 According to data from the U.S. Energy Information Administration (EIA), 121 U.S. coal-fired power plants were repurposed to burn other types of fuels between 2011 and 2019, 103 of which were converted to or replaced by natural gas-fired plants.

"By measuring the equipment via laser scanning, then creating precise 3D models of the turbine assemblies for engineers to analyze for optimal installation points, we can significantly expedite the plants' transitions," says Steve Kersen, president of NVision. "This can result in huge cost savings for projects that would otherwise have been budgeted for a lengthier period using less sophisticated measurement methods. In one recent project, a southeast power plant converting to a Combined Cycle Gas Turbine system will increase wattage output by more than 30% and save over $250,000 by using our services."

According to the U.S. Energy Information Administration (EIA), in the past nine years more than 100 coal-fired plants have been replaced or converted to natural gas. Some of the key factors driving this change are stricter emission standards, lower natural gas prices, and more efficient new natural gas turbine technology. A number of these plants have opted to switch to a Combined Cycle Gas Turbine (CCGT) system. 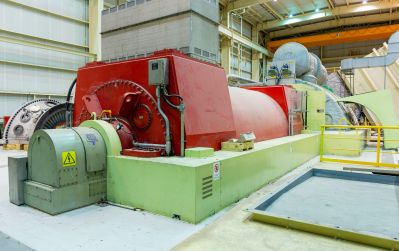 The southeast plant's conversion is part of a county pipeline expansion and is estimated to raise the power output at the plant by nearly 35%. At the same time, emissions will be reduced as CCGT plants emit only about half as much CO2 as a coal-fired plant.

"A key part of transitioning this plant is refurbishing existing turbomachinery to accommodate the new combined cycle system. Plans called for adding updated sensors and emission controls to the plant's turbine assemblies. NVision was brought in by plant management to laser-scan, then create models of the existing turbine housings in order to plan the installation/insertion paths of the new sensors and controls into the internal cavity of the housings," says Kersen.

NVision technicians visited the plant to begin the scanning process. "The nature of this project necessitated the use of several different scanners, each uniquely suited to a particular phase of the job," says Kersen. 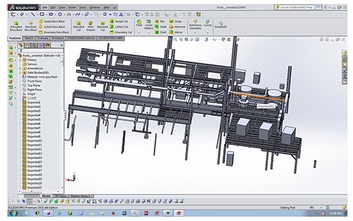 Long-range scanning is a fast-growing field of technology that involves the 3D scanning of large structures (factories, power plants, warehouses) where manual measurements are difficult or even impossible.

"The Large Area scanner provides extremely accurate measurements and geo-spatial data about large structures and areas. For the turbine assemblies' relatively smaller flange hole pattern and internal surfaces, which required more accurate data collection, we used a laser tracker," says Kersen. Like the Large Area scanner, a laser tracker can also measure over a large distance but takes discrete points of areas where high accuracy and detail is the priority.

As an object is inspected, the scanner generates a point cloud consisting of millions of points, each with x,y,z coordinates and i,j,k vectors. These points comprise an exact duplicate of the object's surface, down to the most minute detail. Software integrated into the scanner is then used to convert the point cloud to an STL polygon, which is used as a template to create computer-aided design (CAD) models in IGES and STEP format, a generic CAD file, importable into any CAD software. 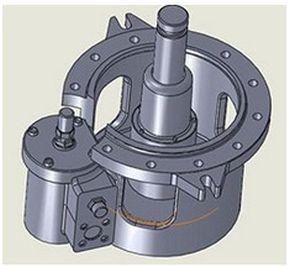 With laser scanning, CAD models can be delivered in your native CAD format, just as though they had been designed from a blank screen.

Measurement of other turbine components, including drive shafts, inlet guides and stator vanes, and airfoil contours, was done using the company's HandHeld scanner, a powerful portable scanning device capable of capturing 3D geometry from objects of almost any size or shape.

The scanning was completed in three days. NVision then processed the data to a fully-aligned assembly in Siemens NX, a high-end CAD/CAM/CAE software, providing plant engineers with a 3D model of the turbine assemblies. Engineers used this to analyze where sensors and controls could be installed and, where necessary, to redesign any parts or structures that needed to be changed for the conversion.

"Repurposing to a CCGT system is increasingly viewed as a viable way for energy producers to reduce emissions and increase power output," says Kersen. "The engineering services we provided to this plant and others switching to natural gas are reducing the time needed to complete the conversions and illustrate the value that 3D non-contact optical scanning can bring to companies repurposing their energy infrastructure."

Plans call for the plant to be operational in 2023.