Process improvement has always been big at Ingersoll Machine Tools in Rockford, Ill. For many years, the company's mechanical, software, and process engineers have teamed with Siemens engineers to develop next-generation, large-format machine designs. Now, they are collaborating on a true breakthrough -- a machine that combines both additive and subtractive manufacturing in one work envelope. 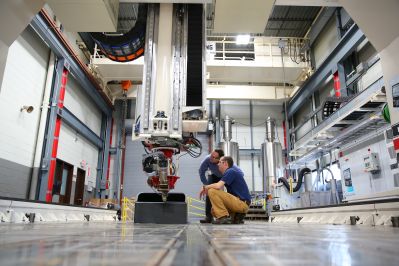 Engineers from aerospace and other large-part sectors come to Ingersoll Machine Tools to collaborate on breakthroughs in additive and subtractive manufacturing.

The advantages promised by Industry 4.0 are being realized at Ingersoll. "Digital twin" machine design simulation, higher robotic intelligence, and complex motion are the essential tools there -- tools that are making large-scale mold production, part machining, and process automation accessible to the broader aerospace, marine, and other industry sectors.

"The disruption promised by Industry 4.0 has already begun," says Jason Melcher, vice president of sales at Ingersoll. "What's all the more remarkable is that it's happening in aerospace, where machine design for improved mold and part production is about the largest of the large, the most difficult of the difficult."

"Here, process impedance is evaluated not just hour-to-hour, but minute-to-minute, and pounds-per-hour," Melcher explains. "We are seeing greater make-ability, supported into the future by the aerospace industry's top CNC and motion technology platform."

Now, Ingersoll and Siemens are teaming up with customer engineering teams to invent, validate, and mitigate risk. They are collaborating on a larger scale, where intelligent robotic fiber placement and massive print/mill part production are no longer a vision but a reality.

A longtime player in automated fiber placement (AFP) for aerospace, the Ingersoll venture into high-end robotics seems a natural progression. The company's ambition has been to make robotic fiber placement affordable to second- and third-tier aerospace part producers. But that ascent into the aerospace market had been held back by several earthbound realities, including the historic inaccuracy of large-scale robotic positioning, the lack of robotic control at the machine operator level, and the high cost of designing and building larger-scale, customized AFP systems. 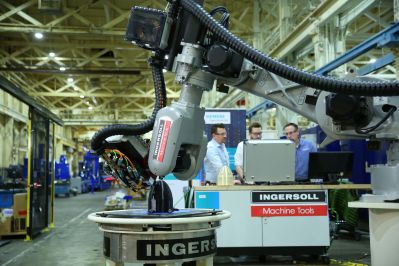 From simulation to 3D printing in no time. A Siemens CNC-controlled robot and Ingersoll's ingenuity make it possible.

Accurate robotic positioning: Even in recent years, the positioning accuracy of larger-scale robotics has been no better than roughly 5mm and with poor repeatability. To address this limitation, Siemens evolved its powerful Sinumerik 840D sl CNC to include Run MyRobot™, its highly sophisticated robotic compensation software. This has enabled Ingersoll to integrate robotics into its new Robotic FP™ fiber placement machine designs, achieving repeatable robotic positioning accuracies to less than 1mm. Accuracy is maintained for both standard and inverse robotic motion.

Robotic control at the machine: The robotic motion of a Robotic FP™ machine is easily controlled at the machine using the Siemens Sinumerik CNC Operate interface. The control's intuitive, graphical interface is universal across the Sinumerik CNC platform of controls. Aerospace customers can achieve higher process efficiencies plantwide as operators quickly become familiar and efficient using an interface that stays the same from machine to machine, even when moving from 3-axis to 5-axis or 6-axis robot with numerous more axis (turntable, mandrill, linear rail, etc.). The operator's experience is the same, whether controlling traditional fiber placement, robotic fiber placement, 3D printing, robotic 3D printing, or any CNC machining process.

Machine design simulation: The machine tool industry has long anticipated the ability to virtually design, test, and redesign the digital twin of a machine, mold, or part before moving into actual production. In aerospace, the sheer size of a machine or a part has made physical prototyping especially costly. Traditional trial-and-error prototyping would produce massive losses in time and material. 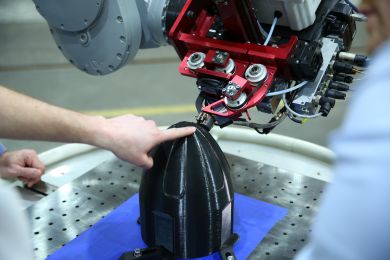 7-axis interpolated motion is no problem for the Sinumerik CNC control. 8-axis can be achieved by adding an extruder control.

To escape these constraints, software engineers at Ingersoll developed simulation software that enables process engineers to virtually design and develop a machine, a mold, or a part. The software wraps around the Siemens Virtual NC Controller Kernel (VNCK) simulation software. The controller processes and simulates virtually all machining cycle data and tool paths exactly as they would be performed on the actual machine, and the Sinumerik Operate interface graphically displays this exact digital twin simulation.

Having adjusted to the sheer size of the MasterPrint™ machine, what holds the engineers' attention is the prospect of faster prototyping, shorter lead times, and 90 percent reductions in manufacturing costs. Ingersoll innovation continues with the development of the MasterPrint 5X™ -- a turnkey print-and-mill machine with even greater productivity breakthroughs that is again enabled by the Siemens Sinumerik 840D sl CNC platform. 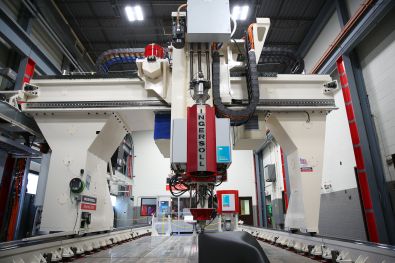 Michael Falk is a mechatronics engineer and the leader of the Siemens sales team that has supported Ingersoll in its rollout of the MasterPrint™ series. Falk has often witnessed the reactions of the aerospace engineers that visit the Ingersoll Development Center, and he can attest to why the "5X" factor is a big attraction. "Ninety percent of the time, anything that is 3D-printed will need to be finish-milled," Falk says. "The new MasterPrint™ does exactly that as a turnkey operation to produce the world's largest parts incorporating automated change-head technology, developed by Ingersoll and supported by Siemens."

Falk says that what aerospace and naval engineers are now witnessing at Ingersoll is their ability to explore process improvement goals that were once unattainable. "In October of 2019, the University of Maine was awarded three Guinness World Records for 3D-printing a 25-foot-long boat that can actually float and carry people," he says. "What's remarkable is that Ingersoll engineers have surpassed the size record several times over since then."

3D printing from any angle: Ingersoll is releasing the new MasterPrint 5X™ Falk says. The machine can print from any angle to its full advantage. So, now you can rapidly make a massive mold or part using the most efficient sequencing. The 5-axis printing nozzle changes orientation accordingly to print much more complicated parts. 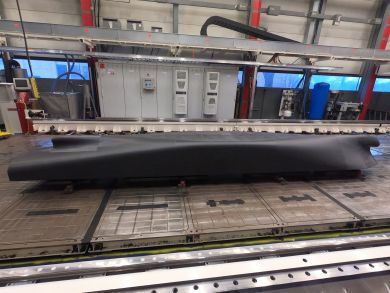 The Ingersoll MasterPrint™ can 3D-print molds and parts as large as 100 feet long, 22 feet wide, and 10 feet high at print rates up to 500 pounds per hour.

High-speed synchronization: "The sync actions during the 3D printing is where a lot of the magic happens," Falk says. "You get great-looking parts with consistent bead geometry. The printing slows only as needed around corners, then resumes optimal speed. Corners are not overfilled. There are no infill issues, no necking down of the bead, no voids in the tooling, and no material build on the inside of the part."

Robotic 3D printing: Ingersoll has taken full advantage of Sinumerik Run MyRobot /Direct Control, the robotic compensation software that is now a key feature of the Siemens Sinumerik 840D sl CNC. Ingersoll offers a wide range of robotic systems where the CNC on the machine can control multiple modules operated by the same robot.

Toolsets for the Future

Jason Melcher and Michael Falk have witnessed a relentless enthusiasm among Ingersoll Machine Tools engineers who are raising exploratory questions in a supportive culture. They describe a lab environment where a process engineer recently out of college is quickly learning things that even the most advanced mechatronics courses do not cover. 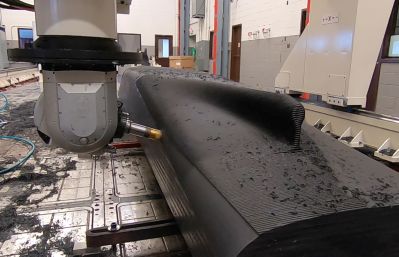 At Ingersoll, engineers are challenged to invent, validate, learn, and build a better machining process -- and they have been given the tools to do this.

Way beyond G-code: "Siemens brings an open toolbox to the machine-design process," Falk says. "You have the 5-axis Sinumerik 840D control, a full set of motors, drives, and components. You have simulation software and an open invitation to third-party innovation. It all comes together, with the Sinumerik CNC and its virtual counterpart, the VNCK kernel, becoming the brain of a much more evolved machining process."

Nate Haug is a process engineer at Ingersoll. He is one of the many inspired engineers at the company who attests to the advantages of using a more open set of CNC and motion control tools. "Siemens starts with a programming language that allows us to do a lot more than we could using a 'G-code only' based control," Haug says. "There are two toolsets, really. One is the Siemens language that allows for an open range of functions and variables. The other toolset lets us inject conditional functions into the brain of the NC. Without both of these toolsets, we wouldn't be able to do what we do. We're using the 840D on a fiber placement machine, on a robotic fiber placement machine, on a 3D printer, on a robotic 3D printer, on machine tools with two heads, with vertical, with five heads, with basically any configuration." 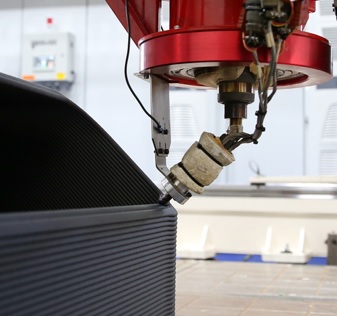 3D printing at a 45-degree angle with smooth, 2-bead consistency enables horizontal and vertical walls to be created without infill or support.

Materials R&D: Haug says that in addition to making improvements among the existing machines at Ingersoll, he and fellow engineers are using their Siemens Sinumerik CNC toolsets to investigate pathways to new machine development. One of those pathways is in materials research.

"Each material has its own flow properties," Haug explains. "The Siemens control enables us to modify features in the code to adjust for the material. The CNC platform enables us to investigate a broader range of materials."

Material property questions explore variables such as strength, shrinkage, warpage, and the use of isotropic versus anisotropic materials. Material solutions emerge in the realms of rapid prototyping for civilian, defense, and infrastructure applications. The concept of a one-of-a-kind printer also emerges, one that can support ambitious initiatives such as bio-based feedstocks using cellulose derived from wood resources. 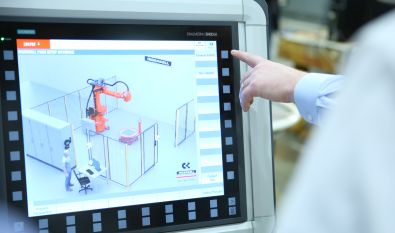 Run MyRobot is a key feature on the Siemens Sinumerik 840D sl CNC control, bringing precision control to the robotic machines at Ingersoll.

Ingersoll sees the day coming soon when inspections are routinely a function of the machine as a secondary process. A fiber placement machining process will monitor layup, check for any defects, and assure the part's accuracy and reliability. Similarly, a hybrid 3D-printing process will one day print and machine back-to-back with seamlessly integrated process self-monitoring.

The development of these automated self-inspection processes is already supported by the Siemens CNC and motion control platform, which governs accurate positioning and positional feedback. A machine can detect, trace, and report any variance.

Expectations on a Higher Plain

As Ingersoll and Siemens have demonstrated, the promised advantages of Industry 4.0 are being implemented today. Having removed the boundaries to large-format robotic fiber placement and 3D printing, expectations now rise toward making breakthrough improvements across the entire part production process.

"It's bigger-picture thinking," says Jason Melcher of Ingersoll. "When we visit a customer, it's to explore process improvement. It's not about a line card of machines that have fixed features and functions. We are entering conversations about tailored process improvements."

For engineers in aerospace, marine, and other progressive sectors, innovation on a larger scale means they now have an unlimited toolbox from which to explore as never before.