Jim Lee, Tool Gauge general manager, faces the stark realities of doing business in a global market. Even though the company is close to many of its customers in the Pacific Northwest, those customers can do business anywhere in the world, including in much lower-cost labor markets. 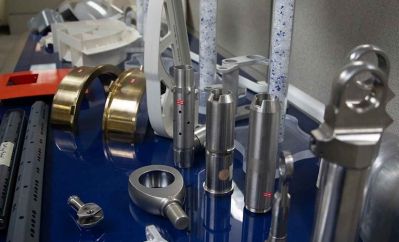 "It became clear to us that the way that we can compete is not by adding more bodies but by adding more technology, and then adding more value using that technology," explains Lee who was looking to hire as many as a hundred new employees that simply weren't available in the tight Pacific Northwest labor market.

Not only was it difficult for a Tool Gauge to hire human operators, the required tasks were also difficult for manual labor to perform -- especially dispensing glue into plastic extruded parts. "The area the glue needs to be applied is incredibly narrow, so over time, operators were seeing fatigue in their hands with potential injury being concern. Scrap rates were also high," says manufacturing engineer at Tool Gauge, Steve Ouzts.

Tool Gauge needed to build in efficiencies -- and found that cobots from Universal Robots (UR) were the perfect solution. Lee describes the three key advantages of UR's collaborative robots. "We chose Universal Robots because number one, they are cobots: We were always kind of afraid of using automation because there's a huge capital investment, but that isn't the case with the Universal Robots. Two, we were concerned about walling off portions of our manufacturing to put in automation cells, which we don't have to do. And three, we can configure the cobots to do hundreds of different things; they're highly configurable and they're easy to move around. So, for us, it was really the only solution." 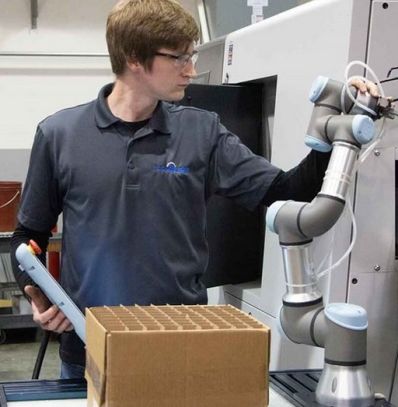 Tool Gauge installed two UR cobots and is already seeing success in incorporating automation into its pricing models.

On the metal side, an easily damaged copper machined part was being produced by a fully-attended CNC machinist simply to pull parts off the CNC chute, clean, rinse, dry, and box them. Now, the parts pass a proximity sensor that sends a signal to a UR3 cobot to pick them up. The cobot places parts in a rinse bath, then holds them up in front of a dryer where after they are dropped into individual cardboard cells.

Tool Gauge was able to use the palletizing wizard that is built into the UR cobot to easily program the robot to drop each part into an open cell in the box in a grid pattern. "When we put the Universal Robot in place, that was a $9,000 savings of the reduced labor involvement on the very first order, and we expect to run that multiple times in the future," says Lee, who is no longer wasting his machinist's talents but can have him focus on higher-value projects such as setting up and programming the CNC machines.

In the injection molding department, a UR5 robot is used for an intricate plastic extrusion assembly, picking up end caps for a plastic panel, moving them through a glue dispenser. After correct dispensing of the glue in the end cap, the UR5 places the part in an actuator on a table where the part is clamped. An operator then takes over, inspects the gluing, and removes the part. This task used to require four operators to produce about two hundred units per day. Now, the automated application requires one operator working with the UR5 cobot to produce four hundred units per day with scrap rates reduced from 15 percent to just three percent. 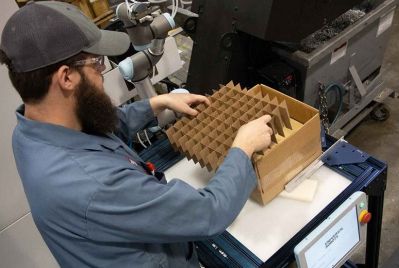 Once this UR3 has dropped parts into all cells in the box, the cobot alerts the operator to insert a new grid pattern so a new layer of parts can be added.

According to CEO of Tool Gauge, Debbie Lee, the company has experienced additional savings through a decrease in repetitive motion injuries. "We have seen a reduction in the Labor and Industry claims on our production floor, as robotics take over these monotonous tasks," she says.

Before adding these robots, manufacturing engineer Ouzts had minimal robotic experience -- just some time in college using a traditional, non-intuitive SCARA robot. The easy UR programming experience was a huge benefit.

"When switching to Universal Robots, the intuitive nature of the graphic user interface is what really drew me in," he says. "I really appreciate how all the terms in the software are in layman's terms. I can understand them a lot easier and know exactly how the code runs from start to finish, and I get very good positive feedback graphically of what my actions will cause the robot to do." 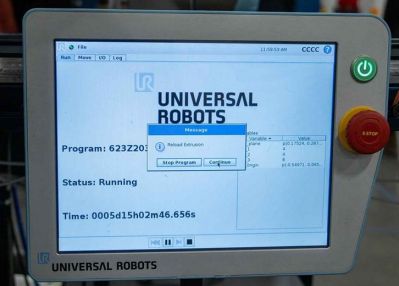 If a part is not loaded correctly, the cobot alerts the operator.

Another benefit of the Universal Robots is how easy it is to connect digital and analog input signals to a control box. Ouzts found that using the proximity sensor was as easy as plugging the wires into one of the 12-volt digital inputs, selecting it from the I/O screen on the UR3's teach pendant, and waiting for a signal from the sensor to tell the cobot when it's time to pick up a part.

With the cobots, the company was able to cut their need for 100 new employees in half, while hiring workers for jobs they want. Lee says, "We found out that the people that were doing the jobs that the robot would do were really happy not to have to do those jobs anymore. I think that we'll be ordering a lot more because people enjoy working next to the robots. They're just fantastic, and they're quiet, and they're very predictable in terms of what they produce and the number of things that they can do. If you ask all of our employees if they would have any concerns about working next to a Universal Robot it would be emphatically, 'Absolutely none.'"

ROI Much Faster than Anticipated

In the aerospace industry, where product designs can remain unchanged for twenty or thirty years, expectations for return on capital investment is longer than many other industries. Lee initially thought that a three- or a four-year return on the robot investment would be good. He was pleasantly surprised by the Universal Robots, seeing expected payback for both robots under a year. "We're very thrilled with that," he states. 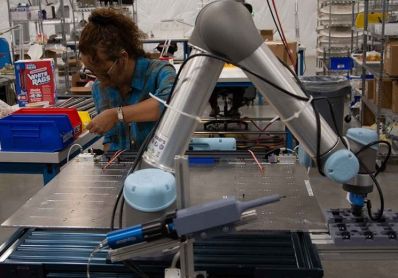 Because the robot paces the work, Tool Gauge is now able to produce higher quality parts at a higher rate.

The cobots' ability to be easily moved and reprogrammed for additional processes, with easy changes of end-of-arm tooling, lets Tool Gauge look at a wide range of tasks where cobot advantages can improve processes and output. For instance, traditional robots on injection molding machines could be replaced with cobots, and cobots could tend presses and other machining tasks, as well as final assembly.

Engineer Ouzts is looking forward to have cobots take on additional high-volume jobs, including one for riveting and assembly. "One particular part requires twenty rivets to be installed, and since it's so high-volume, we immediately saw an application for a robot right there," he says.

Ouzts sounds somewhat surprised as he explains how much he enjoys working with the robots. "It's nice being a part of the future," he says. "It's certainly the direction most manufacturing is heading, and I just like seeing everybody else's faces light up when they see it in operation."