When you're assembling a part of a car's engine that controls the power steering, you have no choice but to be perfect. Anything less than 100 percent quality could result in a tragic failure. To meet that expectation, this Ohio manufacturer received a helping hand...from a robot arm.

At the horseshoe-shaped assembly line in Youngstown, Ohio, engine parts move like clockwork on a conveyor with 60-second takt time for each station, leaving no room for error. As the engine cradle sub-assemblies reach the end of the line, the company needs to inspect that each sub-assembly, which includes a critical steering-gear wire harness connector, is fully seated and locked.

The vision inspection performed by the UR10 cobot is the last step on the fast-paced assembly line where up-time is crucial.

"If there is an intermittent loose connection or it's connected and not locked into place, it can cause an intermittent or complete loss of the power steering, which is a level 8 on the severity scale," says Mike O'Keefe, value-added assembly superintendent at Comprehensive Logistics. "It's a life-threatening failure mode, so we need to make sure that those clips are locked into place with 100 percent confidence."

O'Keefe also explains the challenge. "Industry-wide, manual inspection is only about 80 percent efficient, so we were looking for repeatable quality inspection through an automated system," he says.

This process was causing the Ohio manufacturer headaches, however, as the stationary multi-camera system the company implemented couldn't position cameras into tight spots and wasn't as repeatable as the manufacturer needed. "The data gathered by the camera system wasn't as pure," adds O'Keefe, who also experimented with a probe-style robot that did not meet repeatability requirements. 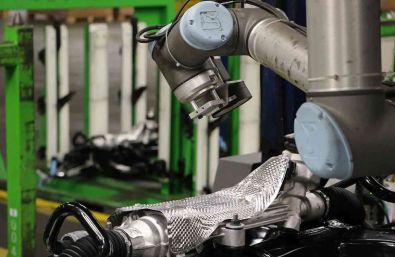 Checking the correct assembly of the plug-ins for the steering gear wire harness is mission critical. An intermittent connection could cause the loss of power steering -- a life-threatening failure mode.

The company started researching alternatives. The solution would have to support Comprehensive Logistics' up-time requirements, be simple to use and had to integrate easily with the processes and people on the line.

"We had to find something that wouldn't contribute to a potential safety issue," explains O'Keefe. "We looked at Universal Robots and quickly realized that this was a cost-effective, light-duty robot that could move a vision camera to the right positions safely and repeatably. The dexterity of the Universal Robot enables it to get underneath where the mission-critical points are and be 100 percent repeatable."

The ceiling-mounted UR10 collaborative robot from Universal Robots is equipped with a vision camera and moves quickly between inspection points, snapping a picture of each connection before it retracts to a "home" position and waits for the next assembly to inspect. 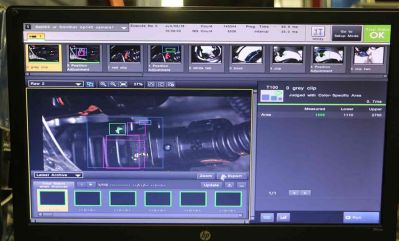 Each image taken by the camera-equipped UR10 is immediately processed and inspection results shown on a screen next to the cobot.

O'Keefe stresses the up-time achieved since the UR10 took over the engine cradle inspection. "The UR10 has been running for two years now in two- or three-shift operations round the clock." The application is also future-proofed for new engine builds. If new requirements or different inspection criteria are given by the customer, it's easy to add quality inspection points to the process. "Our integrator simply dials in remotely, updates what's needed and walks us through the process," says O'Keefe.

The turnkey application was developed by Automation Zone, an Ohio-based Certified Systems Integrator of UR robots. Despite using external resources, the price tag on the overall application was still cost-effective.

Comprehensive Logistics' assembly superintendent details how the robot running a three-shift operation would pay for itself in about seven months. "Looking at just the robot hardware, the ROI is probably less than four months," he says, adding that this calculation does not take into account the elimination of fees from the customer due to quality issues. "Because we get 100 percent quality from the UR robot, I believe that the pay-back period would be even shorter, knowing that we're protected against penalties." 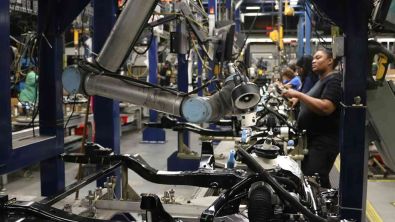 Due to the built-in safety arm that stops operating if it encounters objects or people, employees can work on the line right next to the cobot.

Universal Robots is classified as a collaborative robot -- or cobot -- due to the built-in safety system that makes the robot arm automatically stop operating if it encounters objects or people within its route. This means that Comprehensive Logistics could have the UR10 operate right next to employees on the line.

"We didn't need to have the cumbersome light curtains or other types of guarding that are required with some of the standard robotic systems in the industry," says O'Keefe, stressing the robot's ability to easily start and stop mid-cycle. "If the inspection fails, we can go in and re-inspect just the failed portion of the cycle. Typically, if you have a stand-alone robot, it will re-run the entire process, which takes me over my cycle time."

With the 60 second takt time at each station, cycle time on the assembly line is set for about 48 seconds, with the UR cobot taking approximately 32 seconds to run through the inspection, allowing enough time for re-run fails without the whole line coming to a standstill.