As Good as New? Does It Make Sense to Overhaul Your Tube Bending Machine?

If you happen to have a nice car in the garage but the engine is sputtering, then a trip to the shop is typical. A similar approach can be applied to tube bending machines. Many companies have been reliably using their machines for decades, but now some parts may be sputtering and the technology may have reached its limits. So, what's the best course of action -- a general overhaul or buy a new machine? Tube bending machine manufacturer Schwarze-Robitec provides some expert advice. 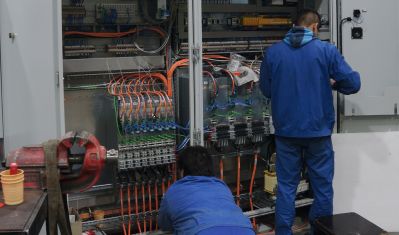 Since expensive parts such as the machine frame and welding components are re-used, an overhauled machine is roughly one-third cheaper than a new machine.

From the automotive industry to shipbuilding to power plant or boiler construction: In many industries, tube bending machines are an indispensable part of the manufacturing process. They have to bend tubes precisely and quickly. Although a high-quality machine is a major investment, the costs are rapidly amortized. In addition, good machines are often in use for decades. Once the technology reaches its limits, many users decide in favor of a general overhaul of their machine.

One of the leading international experts in the sector of tube bending machines is Germany-based company Schwarze-Robitec. When a client orders a general overhaul of one of their machines, it is usually back in operation six months later. However, clients only have to do without their machines for around eight weeks.

Prior to the overhaul the tube bending machine manufacturer procures the necessary materials and purchased parts and manufactures the components. Only then the machine is delivered and fully disassembled into its individual parts.

Hydraulic and electrical installations as well as the entire machine safety system are newly installed during a general overhaul. This is due to the fact that statutory safety regulations have usually changed since the machine was first put into operation.

Schwarze-Robitec sandblasts all welding components and the entire machine frame in order to remove the old paintwork. All welding seams are also checked. So, while the machine frame and the welding components are re-used, all hydraulic and electrical installations are replaced, including hydraulic piping, cables, control cabinet, control technology and control panel.

In addition, the entire machine safety system, including the CE components, for instance, is newly installed during a general overhaul. This is because statutory safety regulations have usually changed since the machine was first put into operation. This is ultimately followed by the assembly of the overhauled machine -- including the preliminary acceptance test at Schwarze-Robitec's site in Cologne and the machine being put into operation at the desired location -- as is the case with a new machine. A 12-month warranty period is offered.

General overhauls are usually ordered by clients. However, in some instances the manufacturer sells a machine that has undergone a general overhaul. This can be a particularly interesting prospect for buyers if the machine configuration is ideally suited to their performance requirements and they are working on a tight budget. Since expensive parts such as the machine frame and welding components are re-used, an overhauled machine is roughly one-third cheaper than a new machine. And yet the buyer receives a product which is as good as new with state-of-the-art technology.

Keeping an Eye on a Machine's Overall Condition

If a car suddenly starts to stutter and breaks down on the road, this doesn't mean that it is a complete write-off. Perhaps it only requires a new oil filter, new spark plugs or maybe even a new engine. For tube bending machines, this is equivalent to a component overhaul. If, for example, a new pressure die assembly, a new swing arm or a new bending head is installed, it is possible to get the machine back up and running again. 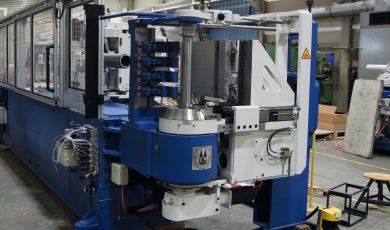 An overhauled machine: as good as a new, with state-of-the-art technology.

However, it is necessary to keep an eye on the overall condition of the machine. For instance, for Schwarze-Robitec's control systems from previous generations prior to the year 2000, there is often only a limited availability of spare parts and upgrades are no longer possible. If such machines are mechanically refurbished, the control technology will still pose a risk of failure -- a general overhaul including a replacement of the control system is therefore a more sensible option.

But should a client's production requirements change fundamentally, then a new machine is in order. Just as with a car, installing a new engine is not worthwhile if this is then shortly followed by a gearbox failure -- or if the owner now needs a van instead of a station wagon.

Tube bending machines are also similar to cars in terms of the intervals between necessary maintenance work: The car of an everyday commuter -- equivalent to a machine working at high capacity in 3-shift operation -- will be in for its next inspection quicker than that of the casual weekend driver. The frequency with which tube bending machines require maintenance work varies depending on their utilization, workload and regular maintenance. It is therefore the combination of many factors that determines whether a general overhaul is a reasonable option: the time, the condition of the machine and the performance requirements in production.