Collaborative or Traditional Robot? The Answer is -- a "Hybrid"

The growing market for high-mix, low-volume production has prompted the emergence of simple, yet powerful and intuitive technology found in collaborative robots. Now, the technology is going further with the introduction of "hybrid" collaborative robots -- unveiling new applications that were previously too complex or uneconomical with classic robotic automation. Dr Michael Klos, General Manager Business Development -- Robotics Division for Yaskawa Europe, gives further insight into when it's best to "go hybrid."

Commercialization in recent years has been driven by a different provider -- a robotics newcomer at the time, with simplified technology, a start-up mentality and modern marketing. A new, growing robot market has emerged, bringing in a fresh breath of air and causing something of a stir among the large-scale industrial robot manufacturers.

Success factors here were the simplicity of handling (operation and commissioning) and the environment of a marketing and information culture tailored to robotics newcomers. The resulting optimistic spirit has motivated many new users to take their first steps in the world of robotics, get to grips with robot technology, approach robot applications in a more pragmatic and less prejudiced manner and quickly enjoy a sense of achievement.

Some of these were new applications for which conventional robotics (supposedly) seemed too bulky, too inflexible and too expensive. Industrial users making increasing use of this simple technology hoped to get rid of the tiresome protective fence that generates space requirements and costs in conventional robot cells.

So, are classic industrial robots in their cages a technology of the past? No -- collaborative robotics will not replace classic robotics but will complement it. The digital factory with all its technological concepts can be excellently implemented with any kind of robotics, regardless of whether the robots are collaborative or not.

If a human being is to work with the robot, the following situation arises from the robot's point of view: as long as the human being is "in the way," the robot has to work slowly -- at a safely limited speed. This leads to short cycle times and often gets in the way of project amortization.

But how can a robot be safe while at the same time being almost as fast as we are familiar with from classic robotics? The answer is the "hybrid" collaborative robot -- a fully-fledged industrial robot that can work at high speed on the one hand but drops back to a safely reduced speed as soon as the human being is directly in the workspace.

What is important here is how to determine the period of human-robot interaction in relation to the total cycle time during planning. Such a breakdown according to time phases is also familiar in the planning of classic robot systems where these are equipped with a safe robot controller -- this type of system is also capable of operating without a safety fence. The only difference is that the classic industrial robot has to remain in a safe position in the presence of humans, while the collaborating hybrid robot continues to work slowly and safely. Standard safety technology is used to detect whether a person is present or not (safety laser scanner, safety curtain, mat). This technology is needed in many projects -- whether with or without collaborating robots -- in order to intercept dangers posed by fixtures, grippers and workpieces. So, it can also be used to shift the robot into a different mode.

As such, the proportional period of human/robot interaction in the total cycle time is essential in terms of designing a workstation:

Permanent human-robot interaction: If robots and humans are permanently working together, if speed is not the key factor or there may still be passenger traffic in the vicinity of the robot, collaborating robots might be the right concept. Cycle times are not a primary goal here, but rather synergy effects achieved by means of clever parallel or cooperative work between humans and robots.

Minimal human-robot interaction: If the human-robot interaction is limited to a very short period of time, classic industrial robots are usually a sensible option. They stop when the person is present but can make the most of their speed advantage for the rest of the time. With multi-station rotary or swivel tables, insertion times can also often be decoupled more favorably.

But things are not always that simple: if the human being is unpredictably in the robot's workspace -- sometimes for a short time and sometimes for a long time -- they also influence the cycle time of the robot station. This makes cycle time and part throughput unpredictable. How is it possible to plan the output of the assembly cell and track how many parts can be produced? What is the forecast? With conventional robot cells, this can be easily calculated in the planning phase.

One great advantage of collaborative robot technology is how it simplifies operation and programming, specifically, intuitive manual guidance but also the tablet-like re-design of the robot control units compared to the classic menu-based or code-based manual operating device. 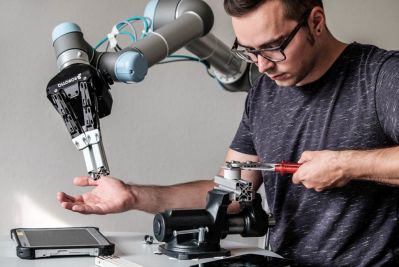 Each of the three technologies has its benefits and drawbacks: manual guidance is good for frequent adjustments of simple pick and place applications -- but it is hardly possible to teach remote laser or path processes to a hundredth of a millimeter with shaky hands.

The classic handheld device offers full functionality and is the first choice for experienced robot programmers if the application is rarely reprogrammed and the full logic, function and command scope of the robot controller is to be used.

And a tablet-based user interface is a happy medium for the app generation.

Each of these three technologies -- and many more programming systems and aids -- are now also available for classic industrial robots. Manufacturers who have both collaborating and classic robots in their portfolio offer all technologies as an option for all robots.

Collaborative robotics is a fascinating new technology for applications where (true) human-robot interaction is required. It opens up a series of new applications for which classic robotics was previously too bulky or uneconomical.

Collaborative robotics will not replace classic robotics but will supplement it. It is a new element in the toolbox of flexible automation, which is first and foremost technology-neutral, committed to an intelligent, suitable and economical solution, and not to the unconditional implementation of collaborative robot technology.