CNC Performance Engineering has found a secret to profitability -- using GibbsCAM to minimize programming time for performance racing parts. "The best way is to take the customer's solid model, bring it right into CAM without having to change a thing, and start machining right on it," says owner Chris Nachtmann.

CNC Performance Engineering (Charlotte, NC) is no stranger to challenges. Shop owner Chris Nachtmann has overcome many of them in the course of delivering contract jobs and his own products. The shop's name suggests fast delivery on contract CNC machining work, and reflects one of its markets, the performance racing industry, which CNC Performance (CNCPE) serves with contract work and its own line of titanium drag racing clutches and components, used by several NHRA teams. 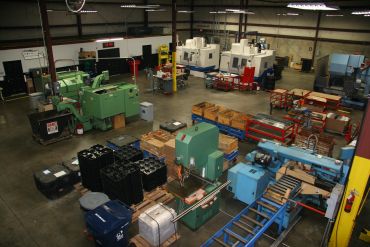 Over the last several years, two developments have challenged Mr. Nachtmann. One is a trend by customers toward providing solid models, without dimensional information or drawings, in various CAD formats. Mr. Nachtmann, who is also a machinist and CNC programmer, says that it took a long time to adjust. "I'm used to having full control of everything, from interpreting the drawing and checking for discrepancy with the CAD model, to modifying the model for machining and programming the part," he says. "It's very difficult to just trust the model."

About a third of CNCPE's business involves supplying racing components to NASCAR and NHRA. CNCPE's own line of drag racing clutches and clutch components are used by several NHRA drag racing teams, including Lagana Motorsports. Shown here is Dominick Lagana driving a 10,000 hp Top Fuel Dragster capable of 330 mph in the quarter mile.

Another hurdle, a bidding and profit challenge that machine shops are finding with increasing frequency, is that customers don't make allowance for programming time. "If you're making a few parts, you can't get paid for programming," he explains. "If I don't include programming time in my bids, I will get the work, so I need larger orders or make sure that I get the repeating orders to recover that cost."

Two jobs for motorsports illustrate how Mr. Nachtmann used the solid CAD models and lack of drawings to his advantage in overcoming this second challenge. As an experienced user of GibbsCAM, Mr. Nachtmann has trusted the system to do all his NC programming for 10 years, so he knew that programming the proper machining strategies for his machining centers would get the jobs done, but was unsure if the needed profit margins could be achieved. 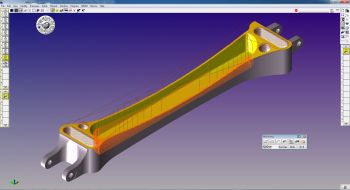 GibbsCAM display of the suspension assembly showing a pocketing toolpath generated directly on the Parasolid CAD model. With similar pockets on both sides of the part, approximately 75% of the stock material is removed to reduce weight.

When CNCPE won the bid to machine five suspension components for a NASCAR Sprint Cup team, GibbsCAM Solid Surfacer saved a lot of time. Instead of detailed drawings, the customer provided a Parasolid CAD model, and a PDF file with only critical hole locations and a specification for ±.0015" tolerance for flatness over the 20" length of the part. For the rest, Mr. Nachtmann had to trust the model. Fortunately, he says, GibbsCAM SolidSurfacer reads Parasolid files flawlessly, and because it generates NC toolpath directly from the solid models, it saved him a lot of time.

He needed to make tooling to hold the work pieces for six operations that would be required for machining. Using the Parasolid model for reference, he used GibbsCAM's modeling functions to create the tooling. Then he programmed the tooling and the part for machining, planning on a strategy of double machining to achieve flatness because removing approximately 75% of the stock for lightness would warp the part. The entire process of programming the part, and modeling and programming the tooling, took only 20 hours, primarily because the CAM software machines directly on the model. CNCPE delivered the five pieces, none exceeding .0008" deviation from perfect flatness. Impressed with delivery and accuracy, the customer repeated 10-piece orders, which yielded the shop the necessary profit, including payment for NC programming time. 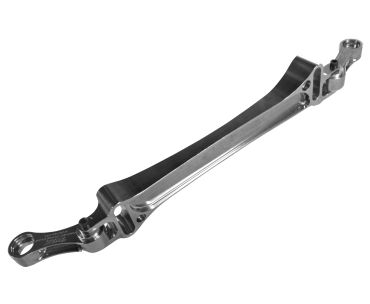 CNC Performance Engineering's fast delivery, accuracy, and ability to maintain flatness at and below .0008" over the 20" length of the component on the initial 5-piece order resulted in repeated orders of 10-piece lots, which enabled the shop to recover programming costs.

Another motorsports team presented a different challenge, making aluminum lay-up molds for carbon fiber seat reinforcement panels that go on either side of a driver. The panels provide crush zones that absorb shock and energy from crash impacts, and to maximize protection, the panels are made to fit each driver's body. The mold, which measures approximately 50" x 25", changes in thickness from 1" to 4" over its length, as its surface transitions from flat, to convex, to flat, to concave. It has raised areas shaped like short plastic cups to both strengthen and create impact-absorption areas on the resulting seat panels. 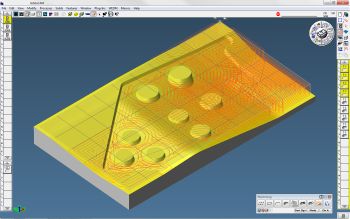 Roughing toolpath generated directly on the Parasolid model of the mold. "If you tried to program one of these, it would take you as long to program it as to machine it," says Mr. Nachtmann.

"If you tried to program one of these, it would take you as long to program it as to machine it," says Mr. Nachtmann. "What I really liked about this project is that I didn't do any programming at all. With GibbsCAM, all we had to do is generate toolpath, which is just selecting the surface, picking my tool and process (roughing or finishing), and clicking 'Do it'. Without any programming time, and no time spent picking off or creating or modifying geometry, we focused strictly on machining. Without this powerful software that brings in the model and lets you start machining right on it, these molds would have been a nightmare."

Mr. Nachtmann says that these two parts, suspension component and seat mold, illustrate how the market is changing, (forcing him to trust customer models), and demonstrate the advantages of GibbsCAM in minimizing the effort to open and work from a CAD model of any format. "To win jobs consistently, and make them profitable from programming through machining, you have to minimize programming time," he says. "The best way is being able to take the customer's solid model, bring it right into CAM without having to change a thing, and start machining right on it. GibbsCAM lets me do that, so I don't waste time programming."