U.S. Factories Lost 1.3 Million Jobs in April. Here's How to Get America Back to Work

The U.S. unemployment rate is officially the worst the country has seen since the Great Depression, with 20.5 million jobs lost in April, and 1.33 lost in factories alone, according to the latest data released by the Bureau of Labor Statistics.

Though employment dropped considerably in every major sector of the American economy, the blow to manufacturing is particularly grievous as factories have had little opportunity to recover from the economic damage of the Great Recession. 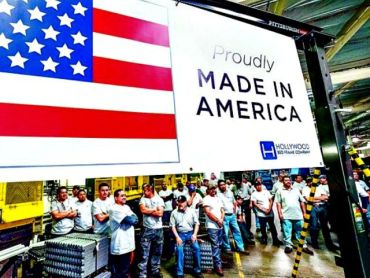 Undoubtedly, America is facing unprecedented challenges. Virtually overnight, the economy has been dramatically altered by the coronavirus pandemic. But, one powerful means of restoring jobs when workers are indeed safe to return to work is legislative action that the Alliance for American Manufacturing has long proposed.

It's time to get serious about helping America's workers, and infrastructure investment is the transformative solution that will do just that.

"Families are hurting right now," Alliance for American Manufacturing President Scott Paul said. "One way our policymakers can give hope to our nation is by taking bold action to put America back to work once it is safe to do so. That means unprecedented investments in rebuilding America, measures to spur auto sales, and incentives to bring back jobs from overseas."

There's agreement across the board that America's crumbling bridges, water systems, electrical grid, roads, and so much more are in desperate need of repair. Dramatically investing in the nation's crumbling infrastructure will not only ensure the ability to keep America quite literally moving, but also foment the development of valuable jobs in America -- something we must ensure through Buy America provisions.

April's unemployment numbers are staggering, and a quick recovery from the pandemic's economic fallout seems unlikely, imperiling millions of Americans and impacting some of the most vulnerable communities. The Alliance believes the U.S. urgently needs the government to act.

To join in urging President Trump and Congress to create millions of jobs by investing in American-made infrastructure, click below.